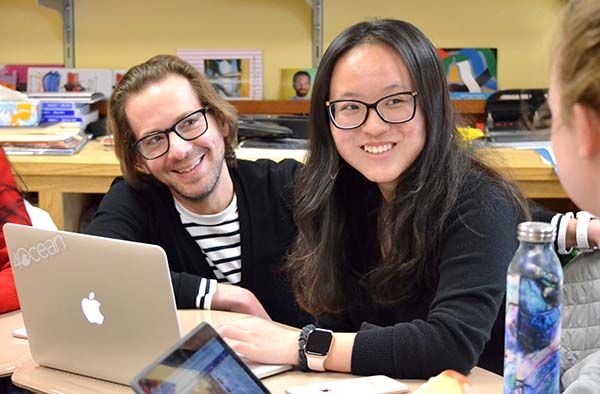 An Upper School faculty member recently received impressive recognition from his native country! French teacher Flavien Collet was bestowed with the Ordre des Palmes Académiques (Order of Academic Palms) which is a national order given by the French Republic. It was originally established in 1808 by Emperor Napoleon as a decoration to honor eminent members of the University of Paris and was changed into an order of merit in 1955  by French President René Coty. The award recognizes Flavien for his outstanding achievements in promoting the study of French language and culture and is reserved for “distinguished academics and figures in the world of education.” A formal ceremony will follow the announcement with the Consulate General of France this Spring.

“It is a tremendous honor,” says Collet. “Getting recognition was never the goal of sharing my passion for my language and culture, but knowing that supporting my students and making a difference in the community is something that the French government values is truly appreciated!”

Flavien has been a French teacher at Bancroft Upper School since 2014. He also currently serves as the President of the Alliance Française de Providence, which is an international organization that aims to promote French language and culture around the world. Prior to that, he was the organization’s Executive Director overseeing marketing, fundraising, and program development including hosting the annual convention of the Federation of Alliances Françaises USA.